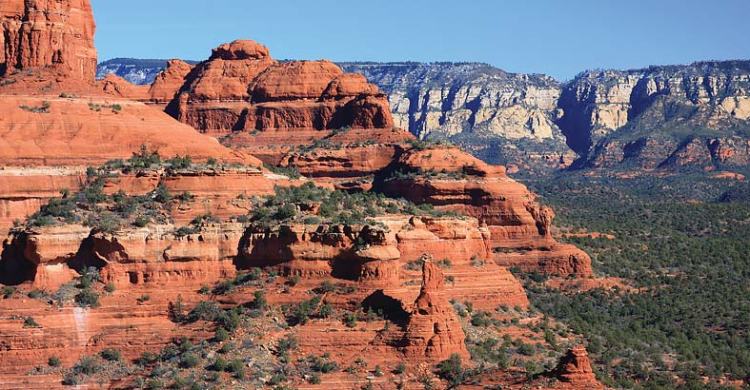 We spent a week in Sedona in a single wide trailer, slightly reminiscent of an old folks trailer park with a rustic Spanish feel.  Inside the gated area was everything we needed.  The walk way through the entirety of the trailer was one person wide. It was a cool place to stay.  Pool, a breakfast cafe on site, and daily art classes.

We were lucky enough to get signed up for an art classes at a nominal fee.  We were thrilled to do a water color painting class.  Now, for my sister this was second nature for her.  She is an amazing artist.  Everything that one needs to be, to be called an artist: creative, thoughtful, and paints as if each brush stroke is preplanned for the the next one as if she sees the finished piece of art in her mind.  It is actually a beautiful thing to watch someone be with their art, in the moment… creating it.

I have a friend who is an architect.  I have seen her drawings on paper, on a computer screen, and even more impressive the buildings she has designed. She is an artist also.  She gets that same look my sister has when she paints and the same ease and grace when she speaks about her designs.

The first full day we had, we were both nursing our way down the hill to a little building.  Putting one step in front of the other-a bit too much fun the night before and our inability to stop talking is often difficult on our trips. Conversations go on and on, unconsciously fighting over the last word, the last laugh, and soon 2am rolls around.

We signed in with a skinny man wearing a beret, small build, no hair with a gentle voice and the sheer sight of this man gave us a little chuckle.  I am not sure if it was his demeanor, the way he spoke and looked perfectly like someone in an 80’s comedy about a painter…a complete stereotype on my part, but he was fun to be with for a few hours. The icing on the cake, his name. Art Gecko.  I think that his name was the kicker to our whispering giggles. Still to this day, I wonder if that was his real name??

I had a surprise for the next day but turns out, not actually a surprise because I told her. I am so bad at keeping surprises. We were headed for a Jeep Adventure.  Alone, she and I would go off road with a penciled paper map in a brand new Cherry Red Rubicon.  This still is one of my favorite adventures.

I started driving through town as we made it to the dirt roads and I remember us looking at each other like we were entering a wonderland of excitment.  The red rocks towered around us, brush and tumble weeds wiped the sides of this awesome toy.  A rather expensive toy but it was SO SWEET! We drove for what seemed like a few miles before our surroundings started to change, the roads narrowed, we began to drive over  uneven ground and rock. My stomach seemed to flutter with nerves or it could have just been sore from all the laughter from the day before and laughter that was happening inside that open-topped jeep of joy.

The terrain again changed drastically after a few S curves and the dirt underneath us started to disappear, we were driving and climbing rocks. At this point, I knew it wasn’t sore stomach muscles, it was fluttering nerves. Another jeep approaches as we sweep by each other nearly hitting mirrors, they warn us of what is ahead.  We climbed the large hill and came around the left bend in the path. About 20 feet in front of us, was solid rock on a 45-degree incline and it sharpened off about ½ way up probably to a 75-degree incline.  After some discussion, about putting the Rubicon in 4-wheel drive manually, my sister says, “now once you start driving you have to make it to the top, there is no stopping half way.” The incline didn’t seem that scary from the flat path we addressed in front of us. I decisively decide… I got this.

I start to accelerate slowly and my sister urges more gas, more gas, and I know my facial expression right then, and my laugh turned to a terrified nervous giggle.  My sister is holding on for dear life, leaned forward as if that would help move us forward faster. Her urgency for me to give it more gas grew quickly and my weightless numb foot couldn’t push any harder.

I started babbling, “oh shit, oh shit. I can’t, I can’t.” I use both feet to slam the break into the floor board and in that exact position, at that angle my entire upper body felt as though I couldn’t lean forward even if it was life or death.  My sister yells, “what the hell,” and looks like she is going to punch me in the face. We both looked forward and all we saw was the sky.  In a split second, I decided I was done driving, at that moment, at that angle, and I was done. I absolutely pictured that if I went up any further the Jeep would somehow tip over backwards and flip end over end down the hill.

I needed my sister to drive.  She decided we were not exactly in the right place to do a Chinese fire drill and switch drivers. I slowly let off the brake which allowed us to roll backwards to where the incline began. Emergency brake engaged, we switch places by me sliding in the passenger seat inside the Jeep and her passing in front of the Jeep to get in the driver’s side.

She took over and charged the climb.  Up slowly we went and once that incline hit 75 degrees I swear those tires had suction cups on them to keep us attached to the rock.  We drove a bit further, another climb or two and we finally reached the top. Red rock towered on one side of us. We stopped in the center of the rock.  Our laughter echoed for miles, I’m sure of it.  We replayed my abort mission mid rock climb and couldn’t catch our breath. We explored a bit, tried to take selfies in the middle of nowhere, yelled to see if voices would echo, talked and relished in the hot humid afternoon drinking water and celebrating with trail mix.

Our journey in the Rubicon was not over.  We had to find our way back and together we decided we were loosing too much daylight. We headed forward off the grid where the map just ended and figured we would make it back just fine.